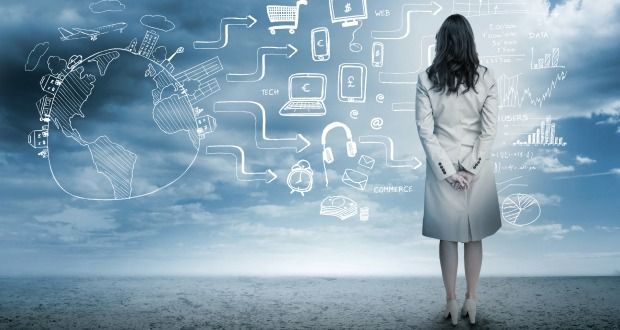 The digital world moves at breakneck speed and women are driving with the front runners, breaking the long-held myth that technology is a male-dominated industry one milestone at a time. Inspired by leading lights like the female COO and CEO of major international technology firms like Facebook and Yahoo!, a growing number of Irish women, from creative innovators to corporate powerhouses, are making their mark on the industry and boldly driving towards successful futures.
From the MD of Microsoft Ireland, CEO of Vodafone Ireland to the VP of European operations at Apple and PayPal’s VP of Global Operations, Irish women are taking the wheel of major international businesses. While there is still a long distance to go, numbers of women at the top tiers of business are still at disappointing levels, with a mere 30% of directorships held by women in Ireland. The signs for the future are good and Irish women are laying the groundwork for business success at home and abroad.

Above the financial gains, there is also the under-utilised skills of female university graduates. In Ireland particularly, the latest data from the Central Statistics Office shows that women are more likely to have a third-level qualification, with over half (55.3%) of women aged 25-34 having a third-level qualification in 2013 compared to just 42.7% of men in this age group. Female students outnumber males in business, administration and law, this highly skilled talent pool can bolster the economy as a whole. Meanwhile increasing numbers of women are studying science, engineering and technology degrees, but over 70% drop out of SET careers, compared with half of men. This is a huge waste of investment, talent and opportunity, especially as the key challenges of our time – technology, renewable energy, medical advances – require diversity of technical and societal engagement.

In the simplest monetary terms, the market of female consumers is worth $20 trillion and women are estimated to be responsible for about 70 per cent of household purchasing power. Companies need to get serious about leveraging female talent. New markets beckon and women are needed to drive us there. It’s time to jump on board and get more women on the boards of Irish companies.

Francis O' Toole is a Educational Psychotherapist & Guidance Counsellor. I set up this blog page to help students gain as much information as possible to be able to make right choices and decisions regarding their career options. I believe that we will be very successful in our careers if we follow what we enjoy. View all posts by Francis O' Toole